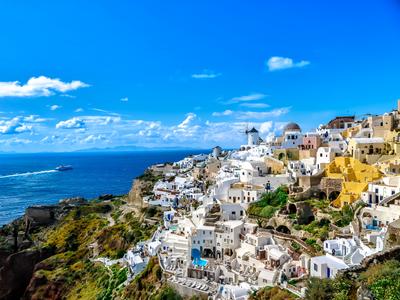 On board Aegean Airlines flights, cabin baggage should not exceed 56x45x25cm. If your hand luggage is bigger, the Aegean Airlines assistance team will most likely ask you to pay extra for checked luggage.

Where does Aegean Airlines fly to?

Aegean Airlines offers direct flights to 92 cities in 39 different countries. Milan, Athens, and Rome are the most popular cities covered by Aegean Airlines.

What is Aegean Airlines’ primary hub?

Aegean Airlines concentrates most of its flight operations in Athens.

How does KAYAK find such low prices on Aegean Airlines flights?

KAYAK is a travel search engine, meaning that we continuously look across the web to find the best deals for our users. With over 2 billion flight queries processed yearly, we are able to display a variety of prices and options on flights from all airlines, including Aegean Airlines.

Well known for being the flag carrier of Greece, Aegean Airlines is one of the largest airlines in the region and operates flights to over 150 destinations spread throughout the world. To visit Europe, you can travel to countries such as Croatia, Denmark, and France, while if you are interested in going to the Middle East, you can choose from locations like Kuwait, Saudi Arabia, and Jordan.

To ensure that flight paths are continually being added, this company has pursued codeshare agreements with a number of airlines, including Air Canada, Ethiopian Airlines, Turkish Airlines, and Lufthansa. Additionally, the airline maintains a commercial agreement with Trenitalia, a company that is known for being one of the largest train operators in Italy.

Customers of Aegean Airlines can choose to fly in either Economy or Business. While Economy will give you access to in-flight entertainment, free soft drinks, and the option of bringing one small carry-on, Business will give you additional perks, such as priority check-in, priority boarding, access to the airline’s lounge, a gourmet meal during the flight, and the option of checking two bags for free.

If you will be flying with small children, there are many free benefits for you to take advantage of, such as a Pilot Pack for infants that includes stickers, baby wipes, and a pacifier clip. Older children will receive items like coloring supplies, a memory card game, and a souvenir pilot badge to take home with them. Special kid-friendly meals can also be provided and they will come in a colorful lunchbox.